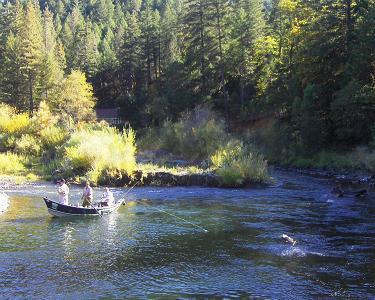 The Trinity River flows straight from the Trinity Alps and goes through a series of 2 Reservoirs, Trinity Dam and Lewiston Dam. From there starts our main stem of the Trinity River.  This water system is a place you can find yourself and the fish. Greg refers to this river as “The Serenity of the Trinity.”  He works this system August through March.

Steelhead and Rainbow Trout(Oncorhynchus mykiss) are present in the Trinity River year round, our primary run of Steelhead is from middle September through March.  We use drift boats and rafts on this fantastic river system.  We approach this river with two fishing styles: Nymphing, we use 9’6″ (7/8 wt.) single handed fast action rods that can handle this type of approach.  Generally speaking, you present the offering under a strike indicator in a dead drift presentation. Swinging where we will use 7wt/8wt single handed or 6/7wt switch and 5/6/7wt spey rods we cast at the top of the run from across to slightly downriver.  The grab will come at one of four stages, the fall, the drift, the emerge and the swing(as if on a pendelum).  The Swing is a client favorite as the rod will feel as if it could be ripped out of your hand.  We use streamers and nymphs to this.

King (Chinook) Salmon (Oncorhynchus tshawytscha) appear in August this is the when Hookem Hecky’s and his guides will mix it up a little, flyfishing and/or conventional. Flyfishing we use 9/wt rods and fish them under a  strike indicator system and catch these fish nymphing using aquatic insect and egg patterns.  Or we’ll fish the lower river swingingstreamer patterns.  Conventional we use rods that are heavy  to medium heavy weight bait caster and spinning rods. Hookem and his guides approach these fish using reaction baits(Quick Fish with sardine wrap or we use Roe backbouncing or float techniques). In the Trinity River these summer and Fall run fish come up very bright and are extremely aggressive.  As the season progresses you can expect a mix of some bright and dark fish.   The average fish runs 8-10 pounds, with a big fish in the 20 to 30 pound range.  King Salmon are present in the Trinity River into November. Hecky usually stops his conventional salmon trips by September 31 this fish just become to dark.

Coho (Silver) Salmon(Oncorhynchus kisutch) is a rare occurrence that we find around November. These Silver Salmon are a King Salmon and Steelhead Trout all in one beautiful fish (explosive, powerful, fast, changing direction, & acrobatic).  We’re catching these fish swinging streamers and on dead drift nymphing while we are fishing for Steelhead.
Where to Stay 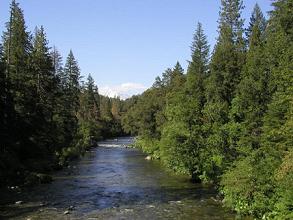 The Sacramento River starts in Mount Shasta, California from a natural underground spring and flows into Lake Siskiyou Reservoir.  The Upper Sacramento River runs from Lake Siskiyou Dam, about 6 miles above Dunsmuir to Lake head, about twenty five miles of river to Shasta Lake.   Greg focuses on this system after the snow melt from June through September.  These trips are walk and wade. In June the hatches are Salmonfly, Golden Stonefly, Yellow Stonefly, and the Green Drakes.  We will use these fly’s in tandem (dry, dry) or dry dropper (dry, subsurface nymphing), and if necessary nymphing (subsurface).  After July the Stonefly hatches are dropping off so we change are focus to Caddis and PMD’s. We will use these offerings September and then comes the legendary October Caddis (the grand daddy of Caddis).  The October Caddis can run through December.

Lower Sacramento River in Redding to Anderson’s Deschutes Bridge is the premier and final destination for spawning King (Chinook) Salmon. This area is designated, “protective spawning grounds.” October through February is the main spawning season for salmon on the Lower Sacramento River.  Enjoy egg drifting with a nymph or tandem eggs for catching trout. Try to get your egg through the salmon redds if you can avoid the wild spawning King Salmon you are sure to hook up on a beautiful wild Rainbow Trout. The spring and summer is dry fly time.  Greg will do nymphing and dry flies.  March, April & May we’ll see March Browns, Spring Caddis (black or olive colored) with PMD’s and BWO’s. June through September starts our legendary Summer Caddis (hydropsyche), Salmonfly, Golden Stonefly, Yellow Stonefly, PMD’s and BWO’s. This Sacramento River system is truly a diamond and your guide Greg Hector will make sure it is a trip you will never forget.