SALMON FISHING IS HOT ON THE TRINITY RIVER (PLEASE LOOK ON MY TRINITY RIVER REPORT), IT’S A GOOD TIME TO GET BRIGHT KING SALMON Booking now for Salmon Trips on the Trinity and Sacramento Rivers, and Book NOW for your Fall and Winter Steelhead Fishing!

The Sacramento River fishing remains fair to good, the average fish is 15 to 17 inches with a few nice fish over 20 inches. Caddis and Mayflies will do the trick on the Sacramento River. Temperatures in Redding this week will be in the 80’s it is a good time to go fishing.

The Salmon showed up pretty good, the limits are being taken on Row and Quickfish with a Sardine Wrap. The average Salmon is 10lbs to 15lbs with some big fish up to 30lbs. There are also some Steelhead in the river as well.

On August 1, 2015, the closure from the 44 Bridge to Keswick was lifted, let me tell you it’s fishing good. The fish on the Sacramento River are extraordinary healthy, we are getting a mix of nice days and hot days. One week it’s a 105 degrees and the next week it’s high 80’s. I will work with you to make sure your day is enjoyable if we end up having a hot spell. Caddis, Blue Wing Olives, PMD’s and a couple of other flies are what the fish are biting on. we should have good fishing from her on out.

The Trinity River Salmon fishing has been slow but there are expected to be 120,000 Fall run Salmon to come into the Klamath/Trinity River Basin. There is a schedule flow change from August 15-19, 2015 sending down 2,650 C.F.S. that should push some Salmon up. We are getting hits, there are some fresh Salmon in the system. It’s going to happen, I would start booking from August 19th forward.

Well it’s been awhile since I updated, I guess that’s what happens when you do it for 5 years diligently. With the exception of fishing it never seems to get old. The current flow for the Sacramento Rivedr is 7,200 Cubic Feet per Second (CFS). This river has plenty of water, right now we have had some hot days, I would suggest a half day if we have any high temperatures. Right now the lower Sac. is good in the evening nymphing Caddis and Mayflies, with good potential dry flies the last hour. 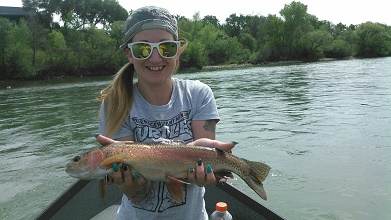 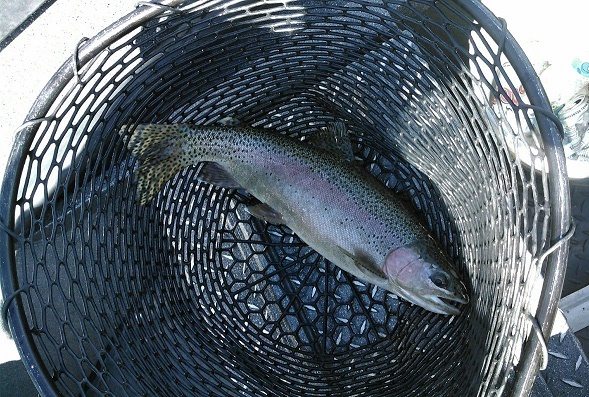 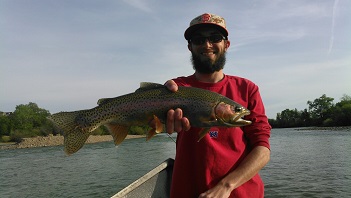 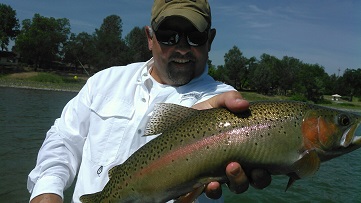 The Sacramento is River is currently Brown and Muddy with less than 6 inches visibility, due to Lake Shasta being muddy. I am going to say fishing on the Sacramento River will be picking up in March, full swing by April/May to middle June. Then the dreaded heat will set in. Right now I am concentrating my efforts on the Trinity River, Harlan and Dan (pictured below) just got into 14 Steelhead with 2 Browns the other day. They are taking all three Stone Flies – Salmon Fly, Golden Stone and Skwala’s. The Trinity River has about 5 foot visibility, with the color comig from Trinity Lake. Egg Patterns are also working, right now we are in a warm spell with temperatures from 65 to 70 degrees. 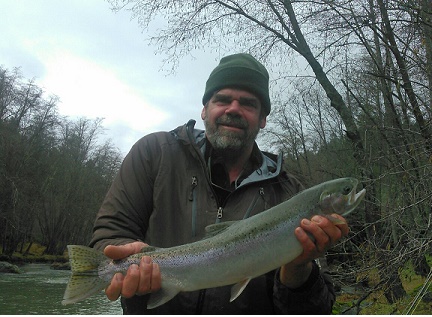 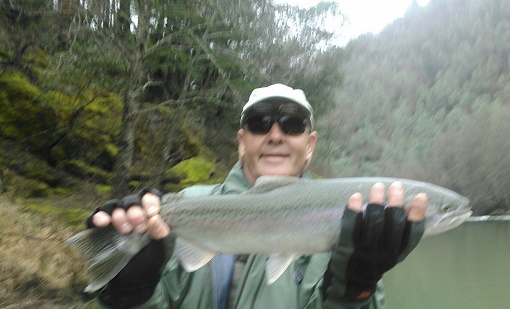